What makes Sri Lanka a beautiful country is its blend of diverse cultural richness that is prominently derived from the various religions, ethnic groups, links to both India and Southeast Asia and the past colonization by the Portuguese, Dutch and British. Below are some of the major cultural highlights from Sri Lanka.

Sri Lanka is a multi-religious country with the majority of its inhabitants practicing Buddhism. Buddhists, mostly from the Sinhalese ethnic group, comprise over 70% of the population. 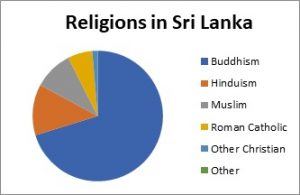 Sri Lankans are considered to be very religious. According to a 2009 Gallup survey, Sri Lanka is listed as one of the most religious countries with 99% of polled individuals saying religion is an important part of their daily lives.

Buddhist temples can be found all throughout the country while the northern and eastern parts of the island, areas in which the majority of the population is Tamil, have many Hindu temples. Although Christians make up only a small percentage of the religious groups, churches can be found on the southern coast as well.

Due to the large influence of religion, it is often interwoven in all aspects of life including art, architecture, food, literature, dance and even sport.

As stated above, much of the art in Sri Lanka originated from religious beliefs represented in various forms including sculpture, dance, architecture and literature with the heaviest influence coming from Buddhism. Its unique position on the ancient Silk Road made Sri Lanka an integral trade partner and helped enrich the tradition of arts and culture.

Sri Lankan cuisine carries strong influences from various historical and cultural factors. Their position on the ancient Silk Road brought contact from foreign traders bringing new and exciting foods from neighboring countries with the strongest influences coming from Southern India, Indonesia and the Netherlands. Although one might see, for example, Indian influence, many of the ingredients for the meals can be found only in Sri Lanka. One of the most important ingredients is the spice added to the dishes. Sri Lanka has a rich history as both a spice producer and trader, and adding spices is seen to make the food more exotic and also healthier.  In addition to spices, other staples include rice and coconut.

Sri Lanka is the fourth largest tea producer in the world. Therefore, tea is an integral part of the culture. Tea plantations were first introduced to Sri Lanka by the British in the late 1800s and since then, it has become one of the biggest producers in the world. Tea is directly linked to hospitality as most households offer guests tea upon arrival.

Ayurvedic Medicine is a traditional system of medicine, derived from various countries such as India and Sri Lanka, in which illnesses are treated with a combination of certain foods, herbs, massage, and special physical exercise. Sri Lanka’s free and universal health-care system includes both Western and Ayurvedic treatments. Ayurveda is a major part of the culture and many Ayurvedic spas and clinics are open for tourists who visit the country, which is also considered one of the major tourist attractions.